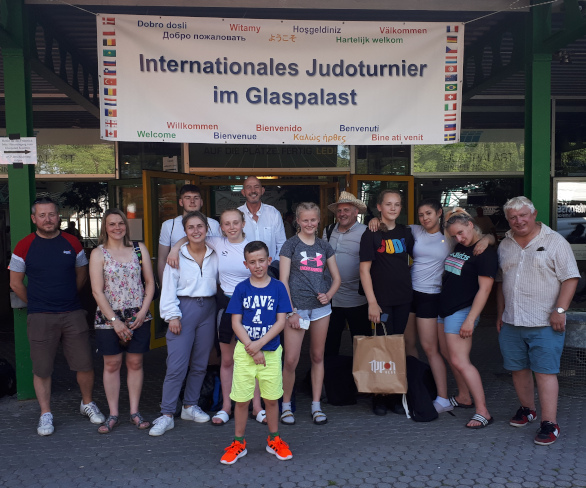 For the fifth successive year running, players from the Yorkshire and Humberside Area of the British Judo Association competed the 2019 Glaspalast International Judo Tournament held in Singefinden, near Stuttgart, Germany on 29-30 June 2019.

Area players came away with one gold and three silver medals:

The Area has organised and supported such trips for the last 12 years in order to provide players with the opportunity to compete abroad. Most players were able to compete on both Saturday and Sunday
thereby gaining valuable experience fighting players from other countries. The downside was having to make the weight twice! Some players having as many as 10 contests over the weekend.

There were approximately 1,400 competitors from over 12 countries spread over 6 age bands throughout the weekend. The numbers and quality of competitors in each age band weight category
indicated the strength and depth of the opposition and provided a reality check and benchmark for the future, especially for players who are looking for international success.

Area players performed well, showing plenty of heart, and there were some outstanding throws. To mention some but not all, Gracie’s sasae-tsuri-komi-ashi, Ella’s superb tai-otoshi counter to uchi-mata
and Gabby’s reverse seoi-nage and ko-uchi-mata reminiscent of Okada in the final of the 1991 World Championships.

Many thanks to the coaches and parents who supported the players and not forgetting CAB Travel who make these trips viable.